Cranberries have very specific needs regarding soil, water, and nutrition, among other things, and the research team at the Philip E. Marucci Center for Blueberry & Cranberry Research are always hard at work helping cranberry growers address those needs. In recent years, they have developed several new varieties to increase yield per acre, combat disease, and improve color. 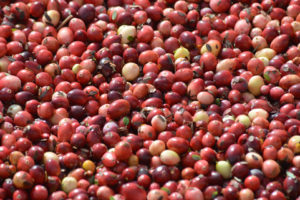 Pine Island is starting to see some nice results from one new variety we planted back in 2015, and there’s exciting news on the horizon for growers in other regions: the Vasanna variety!

According to Rutgers, qualities for Vasanna include yields to over 500 barrels/acre in British Columbia and Wisconsin, low fruit rot, higher berry weight, and mid-season TAcy (color measurement). It should do well in most areas, and particularly well in the typical soil conditions in moderate oceanic climates, such as Oregon, Wisconsin, & British Columbia. 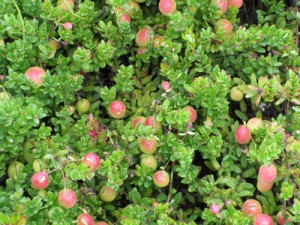 There’s a wonderful story to the Vasanna name, as well, and it means a lot to one particular Rutgers scientist. From Fruit Growers News:

Rutgers University cranberry breeder Nicholi Vorsa named his latest release, Vasanna, in memory of his parents, Vas and Anna. Immigrants from Belarus, they had few resources but encouraged him and his brother to finish their doctorate degrees.

“They saw it as a road to success in this country,” said Vorsa. “I was featured in the New York Times once – it was my early years at Rutgers. My father was very proud of that.”

That the Vorsa family was even able to immigrate was extremely fortunate. Vorsa said his grandfather, Damian, was once a cooper with as many as 20 apprentices who helped him build barrels, casks and even water towers for small villages – but the family members were historically were “White Russians” or anti-communists, he said, and grandfather Damian spent time in the Soviet Union’s gulag. The family was blocked from immigrating for years during the USSR’s Josef Stalin regime, arriving in the United States in 1952, Vorsa said.

In an interview with News 12, Nick says, “They were fortunate to get out after the war and come to the U.S. My grandmother was an avid gardener. I was amazed at the variety of tomatoes she had. And that spawned my interest in this area.”

The NJ cranberry industry, and indeed, the industry as a whole, are grateful to be the beneficiaries of that early interest. . .and fortunate to have such strength and resiliency in our community.