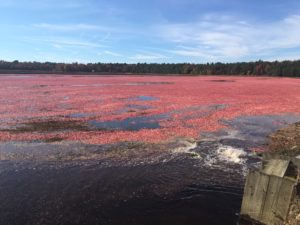 Our team isn’t going full speed ahead just yet. “We’re starting the same as every year, with a focus on taking the early varieties such as Crimson Queen as well as the young beds,” says COO Bryan vonHahmann. “We started off with three crews, but went down to two for now. It hasn’t settled into a groove yet; the color was later this year than expected, and as usual, we’re playing the balance game with color, rot, and water flow.” 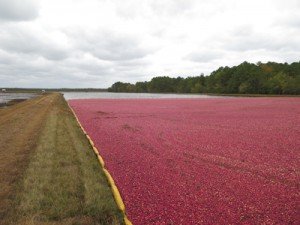 As our team continues to renovate older beds to improve drainage and yield, we’ve been relying more and more on the Gates Harrow to knock the berries from the vines. The Gates Harrow is not as hard on the plants as the reel harvesters, and our renovation program is geared for increased efficiency by being user-friendly for equipment like this. And, of course, we’ve made some upgrades to the harrow over the summer that should make the process more efficient!

“Getting started has been stressful but getting better,” says operations manager Matt Giberson. “The quality looks great and the color looks great.”