Last week we talked about how our team was prepping for harvest, including some equipment modifications. This week, we take a look at the changes to our cleaning facility! Up until now, our cleaning line at the packing house removes trash, debris, leaves, and so forth; however, it does not remove rotten fruit. But our Facilities team is hard at work on upgrades. 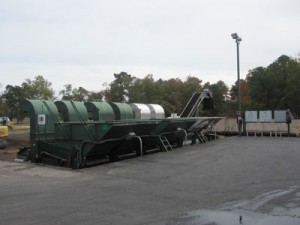 “With the standards changing in fruit quality, Ocean Spray is starting to dock growers for any rot amount greater than 20%, and we get charged the cleaning fee,” says COO Bryan vonHahmann. “If the rot percentage goes over 40%, they won’t even take it. We already know that that in the early years in our young beds, it’s easy to get a lot of rot because the canopy isn’t well developed. But we still get some good fruit from them. So what we decided to do was get an analysis on the good fruit from those young beds and see what they were worth. Once we did the math, we found it was a relatively short payback for us to put in brush washers to push the rotten fruit out. The blowers on the line take the leaves off and dry the fruit some, but rot still goes into the trailer. Our bog side cleaners are a definite improvement on that but even those can’t handle the high rot beds. So we modified our current facility to put in a four-roller brush system in.” 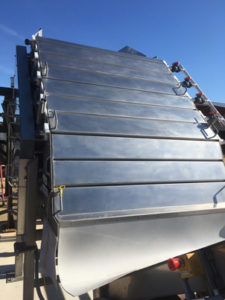 “Our goal is to keep the rot percentage as low as possible,” Bryan says. “In a bed with 25% rot, for example, we’d hope to remove 10%. If we have a bed that’s at 45, we can knock 20% out; we’d need to pay the fee but still send out the good crop. Now that we’re renovating so heavily it’s worth the investment.” 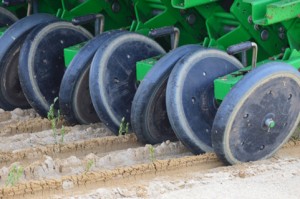 “We’re working hard to have it ready,” says manager Louis Cantafio. “The equipment arrived the second week of August, but we tried to get all the prep work done ahead of that. It’s all the same stuff they’re running up at the receiving station; so we didn’t really need to build anything new. Bryan did the research and ordered the equipment; my team found some equipment we could purchase used and save some money on the project. We started ordering materials so we could be ready to go when the equipment arrived, and we’ve been going gangbusters ever since!” 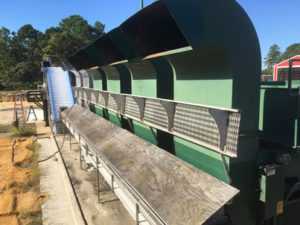 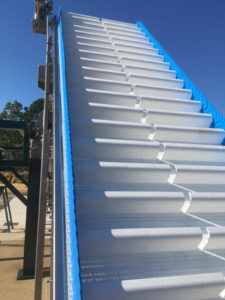 “The fruit goes through the line as usual, but then it goes into the table so that it can be spread into one layer and move through the cleaner,” explains Facilities supervisor Mike Guest. “If the berries are packed too close together it won’t work. All the rest of the work on the line are just to accommodate these additions.” 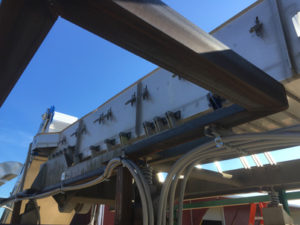 The new line will be done in plenty of time for the harvest, and we’re all looking forward to the results!