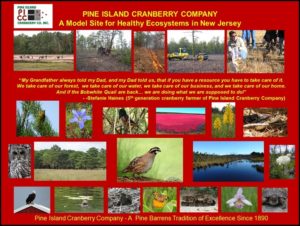 This award is presented to a nominee that demonstrates experience in programs or techniques that have resulted in the restoration, protection and enhancement of the State’s ecological resources. These resources include wetlands, estuaries and coastal areas, as well as non-game and/or threatened and endangered species.

Specifically, the award is related to our work maintaining our property via our own best agricultural practices as well as a good forest stewardship plan, which ended up being conducive to maintaining the critical habitat needed for the Northern bobwhite quail:

The Pine Island Cranberry Company (PICC) in Chatsworth, Burlington County, has had a DEP-approved Forest Stewardship Plan in place since 2001. This plan has produced successional habitat suitable for quail and other plant and animal species. Because of that success, PICC was chosen to be used as a study site for a multi-state Northern Bobwhite Quail Recovery Study, in hopes of restoring the Bobwhite population. This population had plummeted to levels of near-extinction in New Jersey and a more than 80 percent decline nationwide in the past 40 years, according to the National Audubon Society. Beginning in 2015, PICC, along with other study project partners, did the first release of wild Bobwhite brought from Georgia to PICC. Since then, 240 wild birds have been released and tracked at PICC, 39 nests have occurred, 116 confirmed chicks have hatched, birds were confirmed to over-winter from year to year, and confirmed nest successes occurred. The result of PICC’s successful land management methods led to the first-ever federal allocation this year for quail habitat restoration in New Jersey.

“We are proud to to receive this award, and are equally proud to be working with such great organizations as New Jersey Audubon, Pine Creek Forestry, and Tall Timbers,” says CEO Bill Haines. “We’ve always taken care of the resources we have, and we’ll continue to do it. It’s not only good for business; it’s also the right thing to do.”