Last week we went into a bog with one of our picking crews. The next step is one of the most beautiful (and heavily photographed) sights of the harvest every year: gathering the crop. But as with everything related to the harvest, it’s not as simple as our well-trained team makes it look. 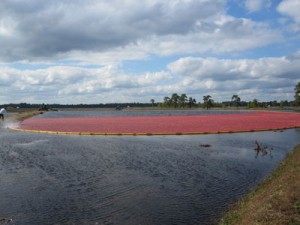 An afternoon spent with Tug Haines’ Blue Team at Red Road shows just how much work goes into the second part of the harvesting process. It can be more difficult in some places than others, depending on terrain. “Sometimes the ground is uneven,” Tug says. “The boom has a chain weight underneath, but if the ground is high enough the boom can push back and some fruit escapes.” This is less of a problem with bogs that have been renovated, since the beds are completely level. 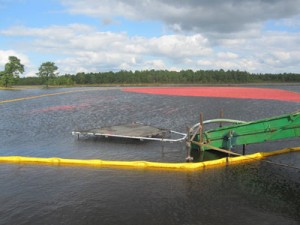 Once the knocking machines leave the bog, it’s time to put the boom in. It’s not always necessary to get more than one or two people into the water for this part, but on this particular bog system there are several trees lining one edge, so the gathering crew, led by Kelvin Colon, need to get into the bog and do this by hand. 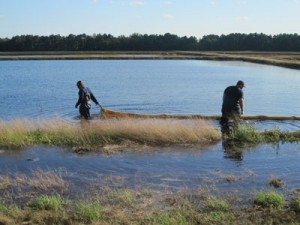 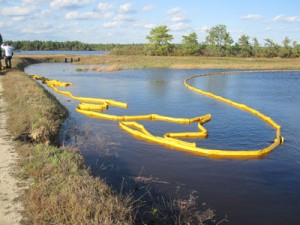 Each end is then attached to a tractor, which slowly moves along the dam, corralling the berries. Some members of the gathering crew follow alongside, “sweeping” the berries and making sure they stay within bounds. “There’s a trick to it,” Tug says. “It looks really simple but it’s tough to get the hang of it; a lot of guys want to move quickly but it actually gets done faster if you slow down. You only move as fast as the tractor; your body should be slow but your arms should move fast.” Once that is done, both ends of the boom are connected to the boom reel, which is wound ever tighter as the berries are brought up the elevator onto the truck. 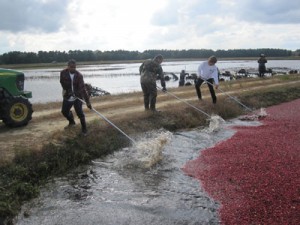 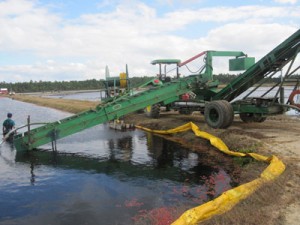 While part of the crew is pulling the boom ever tighter, the other part of the crew are setting up the elevator in order to remove the berries from the water and load the trucks bound for the packing house. There are two parts to the elevator: the bed elevator, which is the part that runs into the bog, and the truck elevator, which is the part that leads up to the truck. 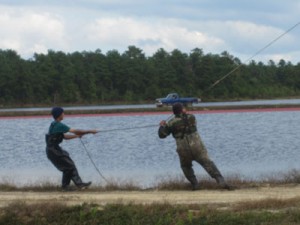 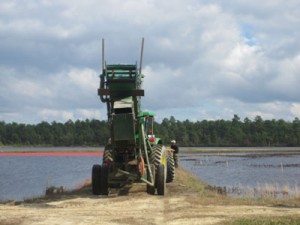 As the bed elevator is lowered into the water, someone is there to connect it to the sprayer, which uses the water to help push the berries up to the elevator. 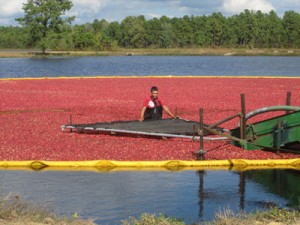 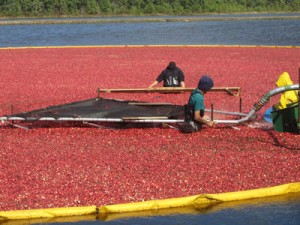 Once all of this is done, it’s time to start moving the berries into the trucks, which have been lined up and are waiting for the set-up to be finished. As each truck pulls up, a crew member jumps up top and makes sure the load is level and that no berries are lost. Kelvin, the Blue Team gathering crew leader, explains, “We get a board to cover the top of the trucks because the two boxes on the back are separate; it keeps the berries from falling between.”

Communication is key with this endeavor; the crew member standing on the truck has to signal both the drivers and the crew members in the water when to stop and when to start. Kelvin’s job is to oversee all of this; he needs to keep the crew and the trucks moving, makes sure that no berries are escaping the boom, makes sure that the crew is pushing berries away. He needs to keep the berries evenly distributed among the boxes on the trucks. Once they’re down to about ten boxes, Tug will start letting the water out. The trick there is not to raise it too high for the pickers in the next bog. 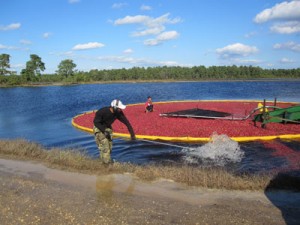 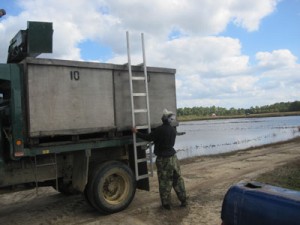 Vincent Arnwine, a new team member who started just before harvest, is visibly impressed by the teamwork involved. “Last week, some of the guys on the picking crew pitched in to help us finish at the end of the day. It’s really cool to work at a place where everyone is willing to do what needs to be done; nobody’s above doing something and no one is afraid of hard work.” 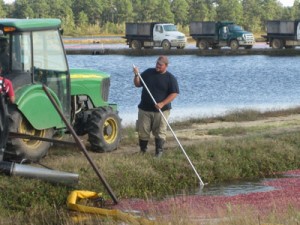 This attention to detail and willingness to step up to the plate shows: our Blue Team has finished the Sim Place portion of the harvest, and despite the flooding and other weather-related setbacks, Sim Place has set a new record. Pine Island Cranberry is proud of every single member of our entire team, who have worked so hard in the past weeks to help get us all here. 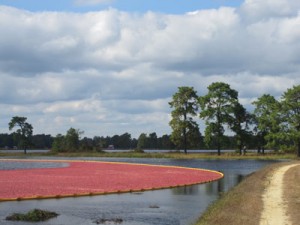