Harvest is getting closer every day, and our team is working steadily to make sure everything is ready! 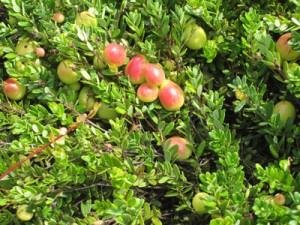 “Everything now becomes more critical because we have the pre-harvest interval that we need to be sensitive to,” says COO Bryan vonHahmann. “We also apply fertilizer this time of year, which helps the plants through the winter. Those are the big things. We’re going through and looking at the sequence for TAcy, for what beds we expect to pick first. We want to take advantage of the higher TAcy levels.” Some varieties color earlier than others, and that is a factor we consider when planning our picking strategy. Ocean Spray likes a consistent color, so we will take samples to the receiving station to check the TAcy number (an acronym for “total anthocyanin concentration” and is a unit of color measurement used in a cranberry) before harvesting. While the humidity gets worse in late summer, the nights tend to get cooler, and this actually improves the color. 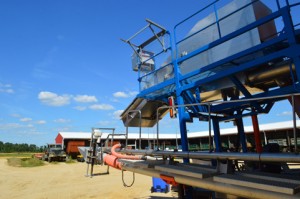 “Equipment is also a big part of prep,” Bryan says, “so we’re designing new stuff for equipment to make us a little more efficient, and we’re looking forward to experimenting with that.” To that end, manager Louis Cantafio walked us a through a little bit of what the Facilties/Equipment team has been working on.

“Most of the equipment that we already own has already been serviced and put away ready to go,” he says. “We knew we were going to be jammed up late in the summer and coming into harvest to do the regular maintenance work, so a lot of it’s done.” Many of the projects the team has in the pipeline are also harvest-related, however. “We’re fabricating a lot of new equipment we didn’t have before, and modifying a lot of equipment we got last season. So we’re making improvements to the berry pump, which is a lot of work! We also have a new trash truck design, so we’re working on the ones we have already as well as building a fourth.” 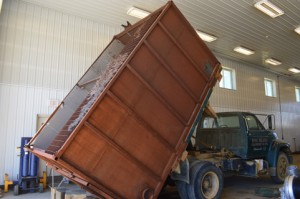 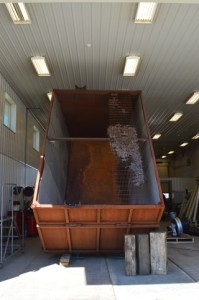 The biggest modification is going to be for the gathering crew. Gathering is always a teamwork-intensive task: when it’s time to put the boom in, you need at least one person in the water as well as on the tractor, and sometimes more depending on the bog layout (trees, heavy grasses, etc.). Each end of the boom is then attached to a tractor, which slowly moves along the dam, corralling the berries. Some members of the gathering crew follow alongside, “sweeping” the berries and making sure they stay within bounds. Once that is done, both ends of the boom are connected to the boom reel, which is wound ever tighter as the berries are brought up the elevator onto the truck. This year, though, our team is making some changes: “We have two blueberry tractors we’re customizing for this,” Louis says. “With the current system we have a blower on the back of the tractor, which means someone has to drive the tractor, someone else works the blower nozzle, and when the berries are really thick and the grass is thick on the edge of the dam, we have the guys sweeping. That’s a lot of manpower. But we’re modifying these tractors with really high powered blowers; much higher than we have already. On the front will the hookup for the boom, and a single operator should be able to run one end of it. This means two guys should be able to boom up a bog on their own, whereas as before it was easily eight.” The idea, he says, is to have the driver hydraulically operate the boom so that when he comes up to a pipe gate or a corner, he can run it out from the cab and will no longer need to rely on extra crew to change it manually. “We’ll have one guy doing the work of four or five,” Louis says. “We’re not only going from eight to ten guys down to two, but they should be able to do it faster; they’ll be in the tractor instead of muscling hose/boom around edge of dam. It will improve safety and efficiency.”

As for the rest of the Pine Island team? “We’re doing everything we can to keep the fruit healthy until harvest!” says Bryan.