If it’s May, it must be time for a visit from Dr. Joan Davenport! A former researcher for Ocean Spray, Joan works with Pine Island to provide guidance on fertilizer, water, and nutrients, as well as general integrated crop management. “At this point in the growing season, we are evaluating the plants for fruit potential and trying to develop recommendations for applications between bloom and fruit set. To do this, I look at hook, the length and color of the new upright growth, and the amount and color of old leaves, including looking for leaves from two growing seasons ago,” Joan says. 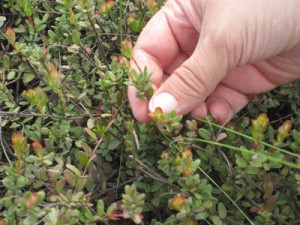 Our team had been a bit concerned about where we were in the growing season, due to all the rain we’ve been getting, but Joan’s visit has set their minds at ease. “We’re actually pretty much where we normally are right around now because while it’s been rainy, it’s been pretty warm too,” says Mike Haines. “We haven’t had a frost night since the beginning of May, and last spring our last frost night was mid-month, so it seems to have all evened out in the end. Joan always tries to time her visit right when bloom is about the start, since it’s the best time to make fertilizer decisions. Of course, we’re now at the point where if there’s a window we just fly even if conditions aren’t perfect!”

“We’re where we need to be right now, which is good,” says Matt Stiles. “This year we’re going to be experimenting a little more with the young stuff and adding more just to get the bogs filled in more quickly, so it was especially valuable to get Joan’s recommendations.”

It was also a great new experience for Mike Scullion, our new ICM team member! “It’s nice walking around with someone with [Joan’s] knowledge, because I have a lot to learn, obviously,” he says. “She outlines the present needs of the plants, but she also educates the staff, so it’s a win-win situation.” One of his biggest lessons: “She taught me how to look for nitrogen and phosphorus deficiencies with the color changes to the leaves. I’m looking forward to her next visit.”

Joan is due to come back mid-summer to check on progress and make any new recommendations necessary, and we’re looking forward to it as well!