Harvest is drawing to a close, and our Orange Harvest Team is helping us get everything in as quickly as possible! Toward the end of this week, they were working roadside, which made a lovely photo op for anyone traveling along Route 563. 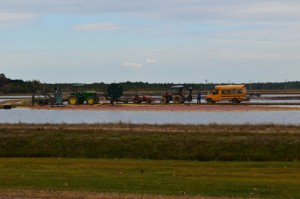 Gathering crew leader Jose Cruz-Soto, better known as Blondie, is a long-time team member who has always shown the willingness to do whatever it takes to get tasks finished and is pleased with the work his crew has been doing. “They’re fast,” he says. “I have two new guys and they’re doing a really good job.” GM Fred Torres agrees: “Blondie’s crew is quick, because he knows how to delegate. He keeps an eye on everything. He’ll pitch in any time he has to, nobody’s too good for that. But he tells his guys what to do and then he makes sure it gets done. You can’t make sure everyone’s doing what they need to do if you’re only doing one task yourself.” It also helps Blondie keep track of the crop; when asked how many boxes have gone from a bog to the packing house, he can answer without even needing to think about it. 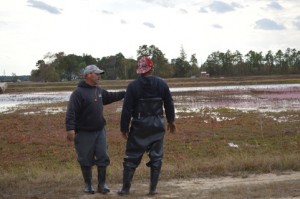 The ability to delegate is also one of the top abilities of Orange Team supervisor Gerardo Ortiz. The team supervisor’s job is a busy one; they are not only the top of the chain of command for both the picking and gathering crews, but they also have to constantly monitor the water for the bogs being picked, the bogs being gathered, the bogs that are being drained, and the bogs that are next in line. Most days, Gerardo won’t necessarily need to get into the water with his crew, but this week, it was all hands on deck as he jumped into the water and got behind a machine. 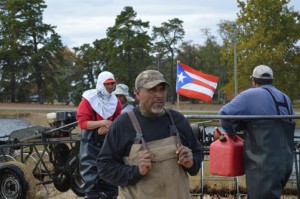 We mentioned last week that the gathering team has a tough job; corralling the berries can be more difficult in some places than others, depending on terrain. But uneven ground as well as ditch placement can also be a problem for the picking crews. Each bog is picked in a specific pattern according to topography, and the picking crew has to carefully move their harvesters around stakes which have been arranged by their team supervisor for maximum operational efficiency. (Following this pattern allows for minimal damage to the vines.) The crew leader also needs to stay ahead of his crew and check for ditches, for everyone’s safety. This is a little easier on newer bogs; they’re more uniform. But after a while our picking crew leaders get to know their sections and know which ones need a little more help. That’s where Gerardo came in. 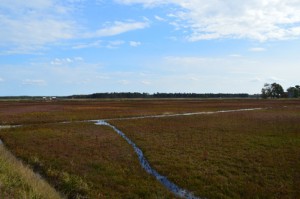 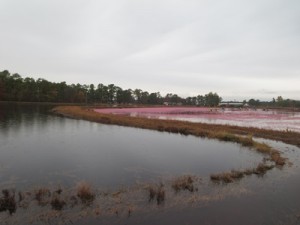 “These are older bogs,” Gerardo explains, “and some of them are really oddly shaped or have unusual ditch patterns. Caesar [Colon, the Orange Team picking crew leader] is a pro, but with these bogs sometimes an extra hand helps.” 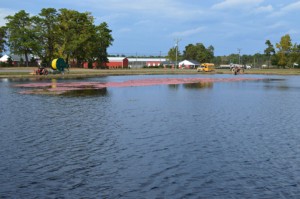 It is this willingness of every single team member to pitch in wherever it’s necessary that makes Pine Island Cranberry nothing but the best!