Cristina Tassone, a fourth generation grower raised in nearby Indian Mills, started with Pine Island Cranberry in 2006 in order to learn techniques she could bring back to her own family farm. She started out (as so many of us in the NJ Pinelands did) in a blueberry packing house back in high school, but went on to earn her BA in elementary education from the University of Portland in Oregon. Cristina spent seven years teaching elementary schools in both Oregon and New Jersey, then went on to Wesleyan College in Macon, Georgia to earn her MBA. 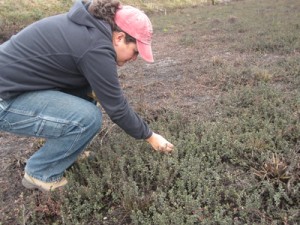 A ride out with Cristina to Sim Place has her musing about how all of this began. Upon her return to New Jersey, she enrolled in Ocean Spray’s “Next Wave” program, set up for the next generation of cranberry growers. It was there she first met members of the Haines family, who thought she might be a good fit and suggested she try Pine Island Cranberry to improve her expertise. She was initially hired as a part-time scout (checking the bogs for pests) for the summer. Upon being hired as full-time, she did many of the smaller jobs wherever she was needed: installing sprinklers, running a forklift, picking up auto parts, and so forth. Bilingual in Spanish, she also used her teaching skills to give other employees language lessons. 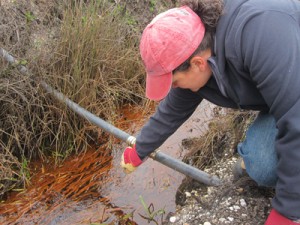 Cristina credits her increased responsibilities to a day when she was building cranberry boxes with Mike Guest, our facilities supervisor. He was called to another project…and Cristina was put in charge of her first crew. “I’ve managed to learn something from just about everyone here,” she says. One of the more valuable things she’s learned, she added, is how to assimilate everyone else’s knowledge to inform her own decisions. As she worked with various other supervisors and team members to pick up the smaller tasks that make Pine Island a success, she began to see how it all comes together. “I don’t know everything . . . I don’t pretend to know everything,” she says. “But one of the things I continue to learn every day is how all the little pieces fit together.” 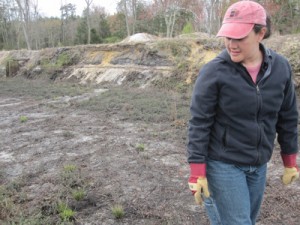 Cristina is now Pine Island’s Integrated Crop manager. Pine Island’s ICM program is based on managing the relationships between water, soils, weather, disease, insects, and nutrition, constantly evaluating current conditions as well as history and trends in order to help her make those best decisions. Her willingness to learn from others is one of her biggest strengths, and she also applies that knowledge to her other specialty: Cristina is also in charge of our recruiting, retention, and training. They might seem like disparate roles, but as Cristina says: “ICM won’t work without the whole thing…everything is related, more and more every day.” 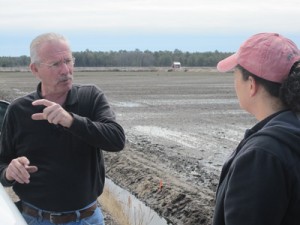