Harvest is now in full swing, and everywhere you look there are gorgeous red berries against the backdrop of green trees and blue skies. But that is not the only thing our team is working on this fall. This week, we reserved one of our team profiles for supervisor Jorge Morales, who is heading up the first ground crew in the history of Pine Island Cranberry. 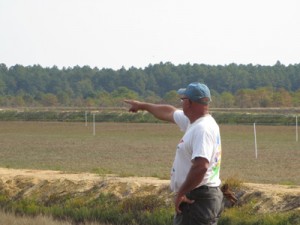 The ground crew is a new addition to this year’s harvest schedule. Led by Jorge Morales and assisted by longtime seasonal team member Alberto Torres, the ground crew follows the gathering teams after they are finished with each bog in order to start clean-up. In previous years, this job was left until after all the bogs were gathered and the harvest was completely in. The crew has several tasks: ditching (both by hand and mechanical) and installing swan line as well as general clean-up. 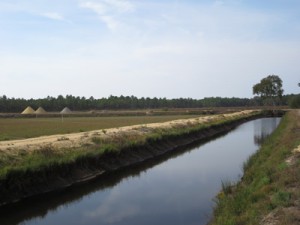 Jorge is a well-regarded and experienced team member who will have been here for thirty-seven years in November. “I’ve done a little bit of everything,” he says. His knowledge and experience made him the ideal person to run this new project. Swan lines are particularly important because of the damage they can do to a crop. PIICM manager Cristina Tassone says, “Just three acres of swan damage can give us a loss of 200 barrels per acre, or even more, depending on the variety. That takes three years to come back.” The strings are effective because they help keep the swans out of the bog by limiting the space available. “Swans are like a commercial airliner,” CEO Bill Haines says. “Having the strings up disrupts their attempt to both land and take off again.” 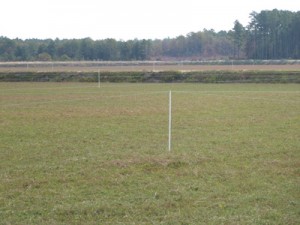 Jorge has a lot of enthusiasm and has the process down cold. “First I have to look at the map and see what my targets are,” he says. “I talked with Fred and decided to finish out at Sim Place this week before heading back to the home farm. It’s easier on the guys that way and we can get things done a lot faster. And you have to get it done fast, because those swans, they do a lot of damage.” First, he says, his crew sets up the rebar that holds the string; the first rod gets placed at thirty feet from the end of the bog and after that it goes to every sixty feet. “You have to make sure it comes out even,” he says, demonstrating how he walks out a bog to measure for the long lines that are installed after the cross lines. “Once all the rods are in, we tie the string on one end and then walk it across.” 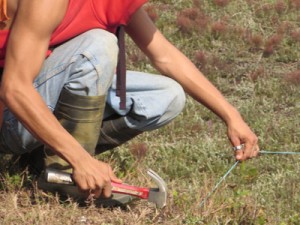 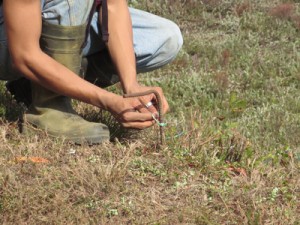 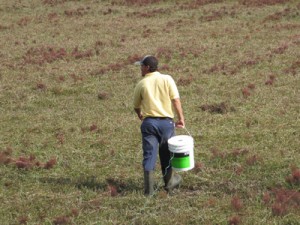 Once the lines are tied, the next step is to install the poles in a checkered pattern within the bog. “The pipe is lighter and it’s easier for the guys to carry, but I think the cedar holds up better,” Jorge says. “And it looks nicer.” 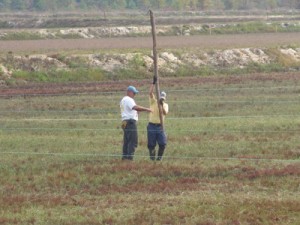 Jorge has an excellent team made almost entirely of new team members, with the exception of experienced seasonal team member Geraldo Cartagena. But, he says, they’re doing an amazing job. “These guys are really working hard,” he says. “We do get a little more done on the weekends, because we have some part-time help, but these guys really move.”

In addition to the swan line, his crew will also clean out the ditches either by hand or using a method called “Shinn ditching”, where a machine is hooked to a tractor to clear out bog debris. Usually this is done in November, but doing it now will mean being able to finish well ahead of both sanding and the winter flood. 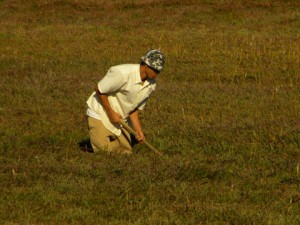 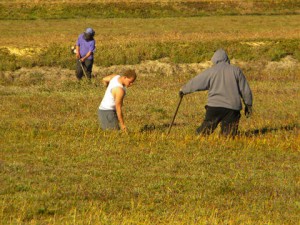 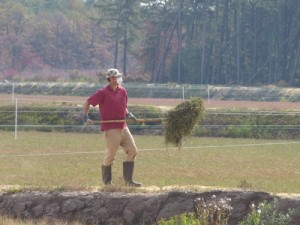 A very hands-on leader, Jorge always jumps right in and does whatever it takes to make sure he and his team do what needs to get done. Bill says: “Swan line is a really important task and is a big key to production. It’s not the glamorous job everyone wants photos of, but it’s extremely necessary in helping us actually grow fruit and set our targets for the next year’s harvest. Jorge and his team are really doing a great job.” 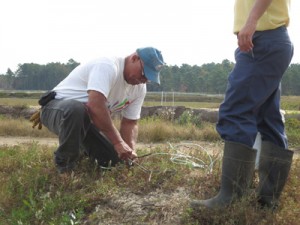