Our team got a bit of an early start this year and began our annual sanding process on Monday.

Sanding is a fundamental component of our Pine Island Integrated Crop Management (PIICM) program, helping us manage the relationship between water, soil, weather, disease, insects, weeds, and nutrition. Sanding is a process where we apply a thin layer of sand on the bog surface every four years on a rotating basis: one inch for established bogs, a half-inch for young bogs. This procedure helps improve growth and yield by stimulating the development of new uprights (covering the runners leads to new root development and creates a more healthy vine) while also suppressing disease and reducing insects (by burying weed seed, spores, and insect eggs). It also improves soil drainage while at the same time absorbing and releasing heat so that frost danger in spring is lessened. This increases our efficiency by lowering the need for extra plant nutrition as well as saving water by cutting down frost irrigation times. 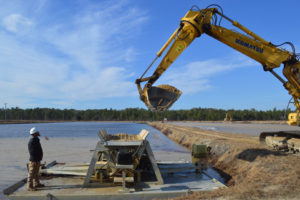 Currently the only beds being sanded are the two-year young beds. “For the young beds you put sand on top of the runners, in order to promote new root growth and get new uprights to come up,” explains ICM manager Mike Haines. “It’s just a part of maintaining a healthy bed. And it helps establish young beds and produce more quickly.” On new beds we use twice the amount of fertilizer we put on a producing bed for those first two years. “There’s been a lot of vegetative growth, which is what we want, so now we’re looking for healthy upright growth.” 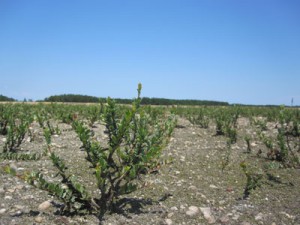 The team made a couple of minor schedule adjustments based on growth. “We planted Centennial in July 2016, so it’s more like eighteen months instead of two years,” Mike says. “Those have grown so well that they’re pretty close to two-year beds, so we decided to go ahead. Everything else we planted there in August and September didn’t grow as quickly, so we let it be.” He and his team have also made a couple of experimental changes this year: “We’ve been doing a half-inch of sand on two-year beds, but we’re doing a good amount of acreage with an inch this year. We switched to a full inch on the established beds farmwide over the past few cycles and have liked the results. The new beds at Black Rock just grew like crazy, so we thought that could work. The rest of them we weren’t so sure, so we’re experimenting at Warehouse #2 and #3 as well as at Centennial #1 with an inch and doing the rest of the young acreage with the half-inch. That’s a good amount of acreage to compare for next year and see what we like better.”

Mike also plans to speak with Dr. Nick Vorsa at Rutgers about the best way to get new hybrids to establish and produce. And once these two year beds have been sanded, they will move to the usual four-year rotation we use for the established beds!