This week we had the opportunity to take another ride around the property with Ted Gordon, a research specialist with more than 35 years experience in botanical studies, including contributions to major plant studies of endangered species in the Pinelands. A former Pinelands Commissioner, Ted primarily conducts rare species surveys and research, monitors habitats, and designs management plans for the conservation and enhancement of rare plants, and we are very fortunate to have access to his knowledge and experience. 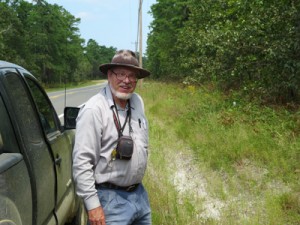 Ted comes out to visit the Sim Place property every year to give suggestions on how to manage areas with certain floral species, such as when it might be time to mow or if a recent prescribed burn has had any effect. “There is a significant patch that has been visited by botanists from all over the world for nearly a century,” he says. “I’ve seen hundreds of species in there. Letting it go probably helped for a bit, but not doing anything at all encourages grasses to overwhelm flowering plants. Many rare species are still here. It’s definitely worth the effort to try and bring them back.” 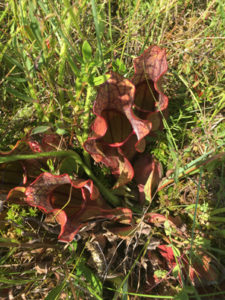 This year, though, was a little different: some New Jersey Audubon staffers came along for the ride. “I was doing a presentation on the quail project and met Ted,” says John Parke, NJA Stewardship Project Director. “Good stewardship practices work for species recovery for wildlife as well as plant life, so it was great to make that connection with someone who understands the native plants. It was a good mesh; this project isn’t just about the quail, it’s about how good management practices affect and impact other species as well. Ted wanted to come out to see the project and managed to time it with his annual visit to see how the native plant life is doing. The Pinelands are unique, and this is an opportunity for us to see how we can all work together.” 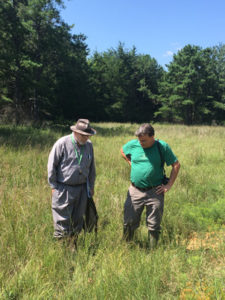 John took Ted and the staff out to watch Phil Coppola and Mike Adams do some telemetry and to look at the nesting areas, while Ted pointed out various plant species along the way. Ted was highly pleased to see some quail as well as how some of the plant species are doing, pointing out the high count on some rare summer species as well as the one getting ready for their autumn debut! “I find all kinds of plants growing near cultivated beds, more so than anywhere else,” he says. “Cranberry properties have the most diversity thanks to common forestry practices.”