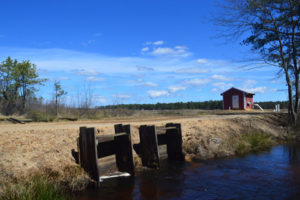 Once the harvest is over, the bogs are flooded in order to protect the cranberry vines from the winter weather. When the warmer weather sets in, the bogs are drained so that the dormant vines awaken for the growing season; while cranberries are most frequently harvested using the “wet pick” method, they do not actually grow under water and thus need to go through the same growing cycle as any other fruit crop. The process, which we call “dumping water” is deceptively simple: a team member takes a gate hook and removes the boards that have been placed across the gate in the bog. (The boards are usually removed in a specific pattern to work with gravity and the natural flow of the water.) Once the boards have been pulled and placed on top of the gate, the water moves to the next bog along the ditches. This water returns to the reservoirs and canals in order to be reused for the next part of the cycle, and takes about 24 hours to drain completely. 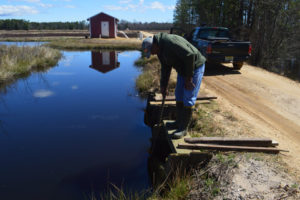 This year, the team has made some changes. “The timing plus the pattern is different this year,” says supervisor Gerardo Ortiz. “The final section we took off last year is the first one we removed this year because of the 2017 renovation.” 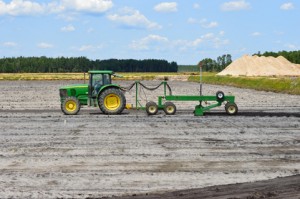 “Yeah, we’re doing things a little differently,” says Operations Manager Matt Giberson. “We’re trying to get a jump start on the reno, since planting a bog in spring gives us an additional year of growing time. So we started up at the top of the farm this time, just because there was so much water in there that usually comes into the bogs planned for this year’s reno. The sooner it dries out, the sooner Steve [Manning, Bog Renovation Manager] can things rolling.” The team’s goal is to finish five systems a day, to be done by the 21st. 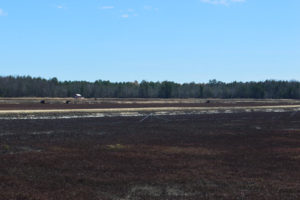 As we prepare for the next process, which is frost protection, our reservoirs are keeping our most valuable resource safe and ready for use!