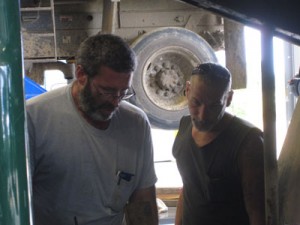 What we said about Louis not long after he started:

Louis, a former land manager with the Franklin Parker Preserve, has been here since early July and is greatly enjoying his time here so far. He says, “Every day it’s always something new and something different.” Mechanic Ernie Waskiewicz agrees: “It’s fun because it’s not the same thing every day, and you’re doing something that needs to be done.” With three advanced degrees, Louis enjoys learning for learning’s sake and is having a good time picking up all the ins and outs of the cranberry business. He was initially attracted to the scale of things at Pine Island, and from his time in the area (he and his wife live in Chatsworth in a house they designed and he built himself) he knows many of our team members and how they both work hard and have a good time. Louis also believes in continuous improvement; in many ways, starting from scratch here has been a help to him in his work. He doesn’t believe in doing things in a particular way just because they’ve always been done that way; he likes finding out why things are done and then finding ways to improve them if need be, whether it’s ordering parts, purchasing equipment, or analyzing standard practices. And he’ll do whatever it takes to help achieve our company goals, pitching in wherever he’s needed.

What some of us are saying about Louis now:

I admire Louis’ dedication to his work – he’s always going to come in early and stay late if he needs to. You can always rely on him to make sure the job’s done and it’s done right.

Louis has the unprecedented ability to make you smile. He does whatever it takes to make our team better, and is way too witty for his own good. 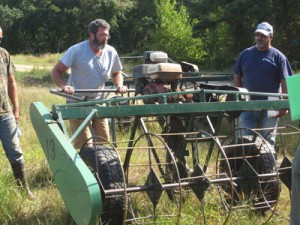 For his part, Louis is happy! “I think in the past five years, we’re doing more and doing it better, and that’s down to everybody’s hard work. The way I see it, the shop is really a facilitation program; we’re responsible for making sure all of our other teams have all the tools and materials and equipment they need. Matt can’t run his team if the planter doesn’t run; bog reno stalls if the pumps aren’t working. And it’s very satisfying to be part of something much larger than myself. I like the work, I like the challenge, and it’s a great team to be a part of.”

And he plans to stick around for a while, too. “I’m having a blast; I’m not going anywhere. If Bill wants to fire me, he’s going to have to do it two or three times!”