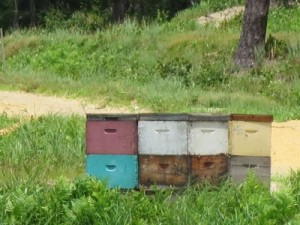 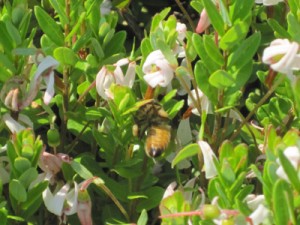 We don’t rely entirely on our hard-working beekeepers; native pollinators such as bumblebees are also valuable to us, and bumblebees will work in wet and/or windy conditions. Bumblebees have other advantages: they work faster, visiting many more flowers per minute. Their large size lets them carry huge pollen loads, allowing longer foraging trips, and achieving better contact with flowers. Larger deposits of pollen promote pollination as well as the formation of more uniform and larger fruit. Perhaps most importantly, bumblebees are naturally attracted to cranberry plants! 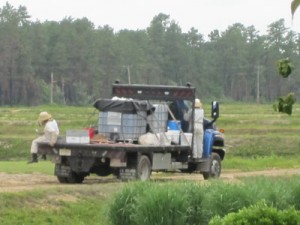 There was some concern that all of the recent rain might have an adverse effect on the colonies, but we were spared the worst of the recent storms and manager Mike Haines isn’t too worried. “I called Dan [Schiffhauer] because I was worried a little about the weather. Yesterday morning it wasn’t raining, but it was warm and humid and I thought they’d be out there. All I saw were bumblebees. But Dan said they’re sensitive to pressure changes from storms coming and in those circumstances might stay close to the colony. By the afternoon they were working like crazy; as long as I see fruit setting, and I have, then they’re doing the work.” 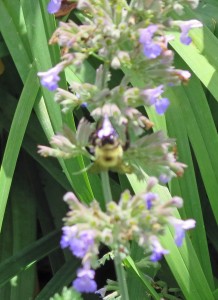 “We’re counting our blessings we didn’t get hit too hard like we have in the past,” Mike says. “As far as the bees go, they’re working when they can; as long as we get a few more good days in there, we’ll do fine as far as pollination is concerned.”