We’ve had some cold winters recently, but this one has been comparatively milder. The past couple of days, however, have been a little more chilly. The cold can made our winter tasks more challenging, and in some past instances, we’ve had to alter plans temporarily. The following lists some things we’ve done in the past to keep our team out of the elements as much as possible.

“Our guys dress for the weather, but we really can’t keep our team exposed to the elements when the temperature is this low,” explains COO Bryan vonHahmann. “And when it’s cold, it’s hard to dig, so we’ve had to slow down on that.” A lot of the outdoor bog reno work gets postponed for the moment, as well as the sanding operation. (While we have tried ice sanding in the past, the weather can actually get too cold to even attempt it; low temperatures not only affect the team, but the equipment as well.)

To that end, our team has kept busy by working indoors as much as possible. Some build signs for our property borders, some work on box repairs, and still others assemble sprinklers for the current acreage under renovation as well as repairing old sprinklers: replacing worn out nozzles, springs, and sprinkler heads. 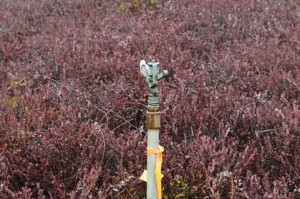 Depending on the day to day forecast, though, some outdoor work is usually possible. “When the wind’s not blowing and the sun is out, we’re able to send a team out to work on the survey lines,” says Bryan. “They’re protected a bit by the trees, so they’re able to go out and post the signs that have been built already.” And when it’s warm enough to run equipment, the team will keep busy disassembling the old wooden gates we’ve recently replaced.

Our team is still doing whatever it takes…but they’re making sure to keep safe and keep warm at the same time!