Pine Island Cranberry has been a long-time proponent of prescribed burning and works closely with the fire service and our forester when it comes to this crucial method of forest maintenance. “Pine Island has a very long history of using prescribed burns to protect life and property on their land as well as the surrounding area,” says Bob Williams of Pine Creek Forestry. “In addition, it is used to sustain or enhance the overall ecological health of their forest. Fire is a critical component of sustaining this forest and used often in the farm’s forest management program. These forests need fire; it is as essential as rain or sunshine to the life of the forest. Native Americans used fire to sustain this forest as well as most forests across North America for millennia, and many plants and animals need fire to provide critical habitat components in their lives.” 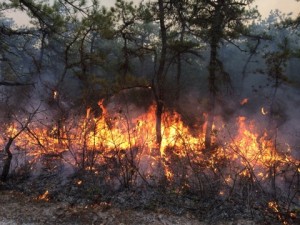 One species who relies on critical forest maintenance is, of course, the bob white quail. According to the latest from New Jersey Audubon:

The use of prescribed burning on the landscape helps remove built up thatch, dead leaves, twigs, and accumulated plant and organic materials that can impede quail and wildlife movement. Prescribed burning also helps to increase the growth of new and existing plants, which can provide an important food source for wildlife in the form of seeds and insects that the plants may host or provide pollen for. This restoration action of performing prescribed burning is essential to the habitat needs of Northern Bobwhite, ensuring Bobwhite have enough resources come spring and the breeding season. Prescribed burning also helps many other wildlife species of the Pinelands that evolved in this disturbance and fire dependent landscape. 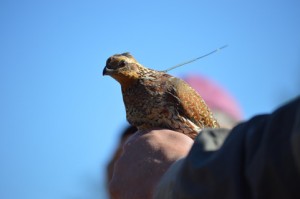 The article goes on to say:

Following this year’s prescribed burn at the Northern Bobwhite study site, NJ Audubon staff were on site and tracked, via telemetry, 12 radio-collared Northern Bobwhite adults, along with 20-25 juvenile birds that revealed themselves to be with the radio-collared quail. As found in previous years of the study, after burning, the birds move into denser cover along the edges of the burn areas. 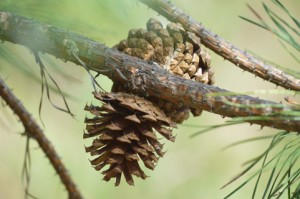 “Restoration is continual,” said NJ Audubon’s Stewardship Project Director John Parke. “People often forget that you have to maintain an ecosystem, and think in the ‘long term’, and sometimes perform activities that may seem counterproductive in order to have the natural systems function properly for future generations. In a state like New Jersey that has significant pressures placed on an already limited land base it is important to realize that ‘restoration’ is not just a one or two time action, it is a series of science-based actions over a sustained period of time.”