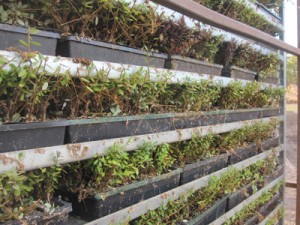 Pine Island used rooted cuttings, which means planting plants with roots already established. One of our concerns prior to getting the plants in is implementing an irrigation program (both with ground water and sprinklers) that provides moisture for vine growth without causing excessive soil saturation, which can lead to favorable conditions for phytopthora, which in turn can lead to fruit or root rot.

Our renovated acreage at Red Road has been planted with the Haines variety, which has been yielding good results for us. “We put in about 15 acres this time,” says manager Mike Haines. “We’ve already planted like 50 acres of Haines over there, so it’s nice that it’ll all be uniform. We can treat it all the same way and harvest it all together around mid-season, as it’s Haines is a mid season ripening variety.”

The planting process is always the same: rooted cuttings are taken from the cart and loaded onto the planter. Team members seated on the planter drop the vines into the carousel and then the vines are distributed into the pre-dug furrow. The planter is followed by other crew members, who make sure that the vines have been placed correctly. Running the planting operation is a true challenge: coordinating everything, getting the right plants at the right time with the right people, constantly adjusting the planters, and identifying problems and how to fix them. 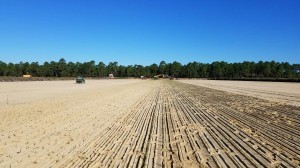 Our team had discussed the possibility of using our new GPS system for planting, but ultimately decided against it. “The tractor didn’t have enough horsepower for the poly puller,” says COO Bryan vonHahmann. 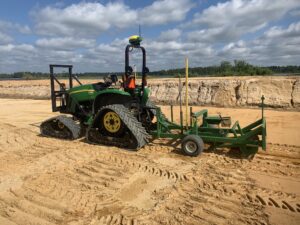 The bogs will take about four years to reach full production, and we anticipate another excellent result!

Bog renovation, as always, is an ongoing project at Pine Island, and our team is moving right along! Manager of Bog Renovations Steve Manning is pleased with the current progress. “Two weeks ago, we finished Osborne Spung,” he says. “It’s been all sub-graded, we’ve built the canals and the dams, and now it’s ready for sand. We’re continuing to put sand in over at Worth Tract; Jeremy [Fenstermaker] is designing the irrigation set-up, the pumps are going in, the structures are being built. Wilfredo [Pagan] has a crew putting gates in.”

Another current project is finishing the planting at Warehouse #1. While our team planted most of that acreage back in the fall, they were only able to finish about 3/4 of the portion alloted to the Haines variety. “There was a problem getting some of the material, but ultimately it won’t really be a big deal,” says manager Mike Haines. “There’s not going to be too much of a growth difference.” Tim [Bourgeois] and Jeremy have been working on getting the planter calibrated in order to keep as few people as possible walking behind it and fixing plants. “The wet weather means we need to keep the planter out of the newer beds, so in the meantime we also have a crew out at Old 11 Acre replanting some spots that died due to Phytophthora,” Mike says. (Phytophthora is a fungus that leads to rot.) 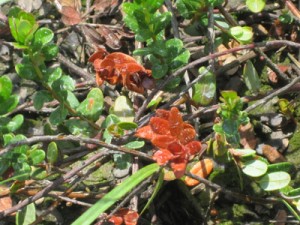 Eliminating fruit rot is a top priority of our team. “It’s usually caused by having too much water on for too long, especially during hot and humid weather conditions,” Mike says. “Last year on these beds, I tried to sub-irrigate by bringing ditches up instead of running sprinklers. But these have a heavier soil, which holds water longer, and I ended up watering more than needed. So we considered all that and decided to keep ditches down and just water as needed. Matt [Stiles] is incorporating that as part of his irrigation plan, as well as taking some other preventive measures. Jeremy did a lot of research and found we can switch nozzles on sprinklers so we can irrigate using 33% less water, which will be great for next year when these beds will be ready for frost protection.” 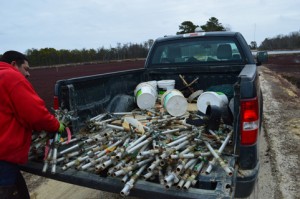 “Everyone’s doing a great job; it can be really tedious hand planting everything,” Mike says. “But things have been moving faster than I’ve ever seen before!”

Our 2015 bog reno is done and for the grand finale, our team finished with the inaugural planting of the new Rutgers Haines variety!

The Haines™ Cranberry Variety…resulted from a 1999 cross between the Crimson Queen® variety as the seed parent and #35 as the pollen parent. The #35 variety is an unpatented variety from a ‘Howes x Searles’ cross from the 1940s USDA/NJAES Cranberry Breeding Program. Haines variety was one of 138 progeny of this 1999 cross, made at the Philip E. Marucci Center for Cranberry Research in Chatsworth, NJ. Haines variety was initially selected for its very high yield potential, mid-season ripening, large round berry (averaging about two grams per berry) and uniform fruit color. In 2007, the Haines variety was selected for further testing in advanced replication selection trials in Oregon, Washington, and Wisconsin. The plots continued to exhibit the variety’s consistent high yields with mid-season ripening. Haines has also exhibited less fruit rot than Stevens in these plots.

“We’re putting Haines in on a ten acre bog, but since it’s a new variety, stock is still low, so we ended up planting 8 acres and will finish in spring,” explains New Production Manager Mike Haines. “Those eight acres only took two days, with an average of 4.25 acres a day. That’s really good. And we did it with no late nights; we worked from 7 to 5:30 and our numbers were up from the previous record of 3.5 acres/day.” When asked why, he says, “There are lots of reasons. Every year, there are mistakes you learn from. That’s one improvement. The land is well cleared; there were no stumps that can cause a momentary halting of the process. We concentrated on having both planters make the longest passes possible through the bed, which means we have to make fewer turns, which increases our efficiency.” 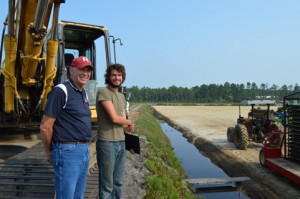 Planting a new variety is not without its challenges! “We finished up with hand planting, and I was pretty nervous about going back and forth between the Haines bog and the Mullica Queens,” Mike says. “Making sure we didn’t create any inadvertent hybrids was a little nerve-wracking!” He is hopeful for the expected higher yields and increased rot resistance, as well: “If you have your name on it, you especially want to get good results.”