Some exciting recent news from the research side of the cranberry industry: Rutgers has released their latest variety, named for the late Bill Haines, Sr.

The Haines™ Cranberry Variety…resulted from a 1999 cross between the Crimson Queen® variety as the seed parent and #35 as the pollen parent. The #35 variety is an unpatented variety from a ‘Howes x Searles’ cross from the 1940s USDA/NJAES Cranberry Breeding Program. Haines variety was one of 138 progeny of this 1999 cross, made at the Philip E. Marucci Center for Cranberry Research in Chatsworth, NJ. Haines variety was initially selected for its very high yield potential, mid-season ripening, large round berry (averaging about two grams per berry) and uniform fruit color. In 2007, the Haines variety was selected for further testing in advanced replication selection trials in Oregon, Washington, and Wisconsin. The plots continued to exhibit the variety’s consistent high yields with mid-season ripening. Haines has also exhibited less fruit rot than Stevens in these plots.

Dr. Nick Vorsa of Rutgers explains: “Prior to Integrity Propagation and the diligence of Abbot Lee in DNA fingerprinting and virus indexing with Rutgers varieties, there was little or no effort for cranberry propagators to sell vines of 100% purity of a variety and there was little assurance that a grower purchasing prunings, mowings, or plants of a variety were ‘true-to-type’, nor the level of ‘off-type’ contamination.” 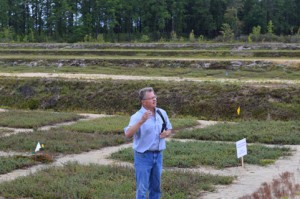 Part of the reason behind the decision to name the new variety for Bill Sr, Nick says, is that Bill generously offered beds for the early Rutgers cranberry breeding program: “He greatly enjoyed walking the Rutgers breeding plots on the bed and observing the performance of over 1,600 plots.” As the release says, “[e]mbracing new technology was a priority for Bill”; he never took anything for granted and was always looking for ways to improve the crop not just for his own farm, but for his fellow growers as well.

Integrity Propagation has been working with Rutgers for several years to develop Haines stock and is currently taking orders for 2016. We look forward to seeing the results!