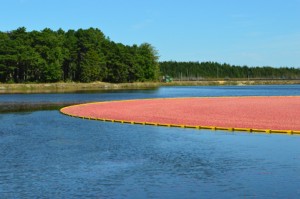 This week, harvest began at our Sim Place bogs, with supervisor Matt Giberson overseeing a hard-working team on the Gates Harrow and new bogside cleaner. Last week, Matt and his team (along with a staff member from Paul’s Machine & Tool) tested the cleaner on some newer bogs that aren’t yet producing much viable fruit, but now the real test has begun! 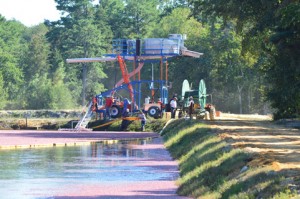 While setting up the boom remains the same, the bogside cleaner does the job of several machines, eliminating the need for an elevator, extra tractors, and the cleaning equipment at the packing house; instead, bog debris is removed from the fruit as it is gathered, and the loaded truck proceeds immediately to the Ocean Spray receiving station in Chatsworth. 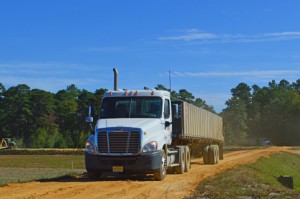 “It’s going well, really well,” COO Bryan vonHahmann says. “We’ve come a long way in the last two weeks. There’s been a big learning curve, as expected. We’ve set some goals; by the end of the season, we want to have a truck loaded every twenty minutes, and we’ve just loaded one in eighteen. We have a few more modifications to make, and we’ll do those over the season, but we’re really pleased with where we’re at!” 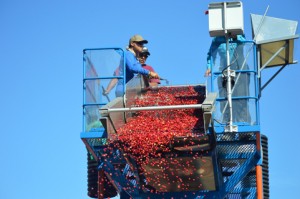 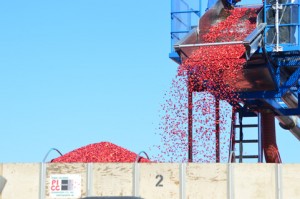 The new technology isn’t the only thing Bryan is happy about: “The team has done a fantastic job taking on new tech and working through issues; no one is getting discouraged, just forging forward. They’re all very engaged.” He notes that the team leader has already picked up on many of the intricacies and called a brief halt to proceedings at one point because something sounded “off” to her. “She thought something didn’t sound ‘right’, and stop to check immediately. She didn’t find anything, but had the wherewithal to stop it as opposed to letting the machine run and possibly finding a bigger problem later on. She’s doing a great job.” 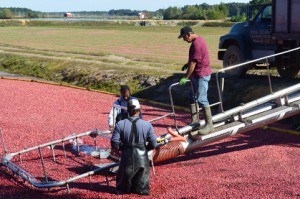