An unseasonably mild February means our team is able to focus very easily on midwinter projects such as sanding and prescribed burning. 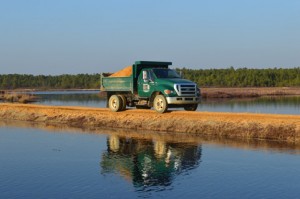 “We burned roughly 900 acres last week with a 5 or 6 man crew, and then Gerard and I finished two small blocks yesterday, since we had the opportunity,” says manager of operations Matt Giberson. “It’s been a challenge because the weather’s been so dry. For a newbie it’s a little stressful sometimes, especially when we’re trying not to burn certain blocks, which usually means having to burn around some trees. It’s like doing a jigsaw puzzle.” 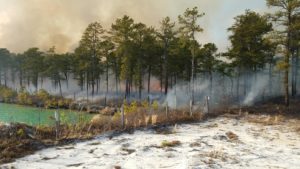 It’s also important to make sure everyone’s communicating and everyone’s doing the right thing. “We all had radios, and we all went over the plan prior to burning,” Matt says. “We discussed our targets, we all looked over the maps. Friday we did 500 acres with 6 guys; it was a big day. Monday we had a crew of 5 and it was a bit more of a challenge due to the dry weather; we had to be careful to do things slow.” But the end is in sight! There are only about 100 acres to go and then the team will have hit our target for the year, and then Matt and Bill will discuss next year’s plan and pinpoint some areas that haven’t been touched in a long time.

“The real key is communicating with Shawn and Sammy and Bill Hamilton,” Matt says. “It’s great having such a good working relationship with those guys. They’ve been busy, too; this weather is highly unusual for this time of year and they’ll also field a lot of calls from people driving by when we’re burning. Which is understandable! But since they’re so busy, it means they’re around if anything goes wrong. So far our only mishap has been the back of one of our wooden gates. 900 acres, one gate. Not too shabby.” 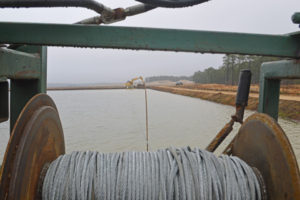 While all of this is going on, Matt Stiles has been in charge of finishing up the annual sanding operation. “We ran 400 machine loads of sand yesterday, making it our third best day this year,” Matt Giberson says. “This kind of weather in mid-February makes things easier; sand goes through more smoothly and the guys are happy out there in their shirt sleeves. Everyone’s in a better mood, it’s easier to get the work done, it’s easier on equipment, and we were able to get a lot done with a short crew.”