On a cranberry farm, dams serve two purposes: to detain the water used for irrigation and water management, and for vehicle use. Dam maintenance is highly important for both safety and equipment. 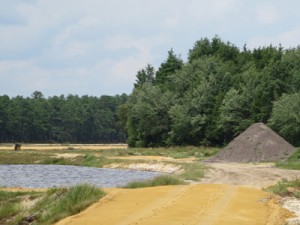 Our latest project out at Sim Place included widening several dams for various purposes. As with the Oswego renovation, it makes hauling easier, especially since parts of Sim Place are quite a distance from the home farm. Instead of several trucks carrying two boxes, we can use a tractor trailer that carries nine and won’t need to use as many trucks. It will be more efficient for both the gathering team and the packing house, as well as freeing up team members to be elsewhere if we need them. 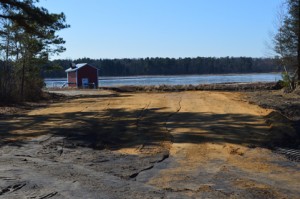 Assistant manager Mike Haines says, “We’ve planned it out so there’s a route where they can gather the bogs off one dam in order to widen as few turns as possible. It was a little challenging, because before we decided this was a project we needed to do, there had already been some gates installed. So in order to do this, we had to go ahead and move/replace four gates. We also went ahead and made a completely new road in one section where previously a trailer would have had to make a crazy left turn.” 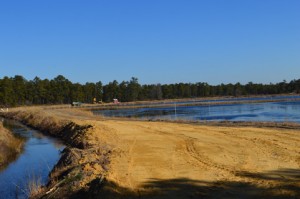 Another reason for widening the dams at Sim Place is to make room for new equipment. “Matt’s [supervisor Matt Giberson] crew is usually the one assigned to Sim Place, and they’ll be the ones working with the new bogside cleaner,” Mike says. “Having more room will make everything run smoothly.”