The weather today is perfect for a blog update on our targets for this spring! 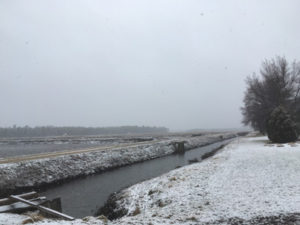 . . . Well, it’s giving us something to look forward to, anyway. Our team is currently finishing up their winter tasks and preparing for the growing season, and so far, things are going well.

“We’ve already taken the water off the beds that are in either their first or second growing season,” says CEO Bill Haines. “We’ve also made good progress this winter on renovation thanks to mild weather, and are hoping to be ahead of schedule so we can begin work on the new renovation project. Sanding is on track; we’ll finish within a week, then start taking water off the established beds as well as start getting irrigation set up and removing swan strings. We’re going to continue to get the dams ready for use of the semis.” 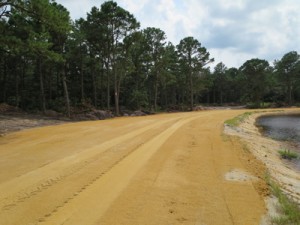 As always, fruit rot is an ongoing concern. “Mike and his team are thinking hard and talking with the scientists at Rutgers and Ocean Spray to see what we can do to better control rot,” Bill says. “We’ve had increased rot for past couple years while standards from the market are higher and higher, so that’s important for us to work on. We’re also looking into improving our equipment; we want to prevent rot altogether, but with either additional equipment or improved equipment we can also try removing rot before delivering to Ocean Spray.” And, of course, our renovation program is expected to assist with this. “We have an entirely new system that we upgraded last year; we’re trying a different layout as well as different sprinkler heads to see if we can improve coverage. We’re also going to work on modifying one of our buggies as a prototype for doing ground coverage as part of rot control.” 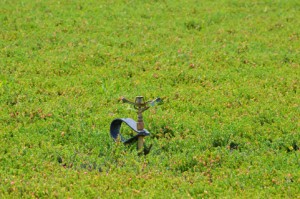 “Mainly I’ve been doing a lot of prepwork,” says ICM manager Mike Haines. “Once it gets busier I’d rather not make decisions on the fly; it’s much to have stuff planned out beforehand. So I’ve been spending time with Peter [Oudemans], Dan [Schiffhauer] and Cesar [Rodriguez-Saona] as well as emailing with Joan [Davenport]. We’re mainly thinking about early season applications and putting micronutrients on, specifically copper and zinc. We’re also planning our roughneck fertilizer, which is our first application after micronutrients, basing our decisions on tissue samples, and last year’s yield. For example, everything that got sanded won’t get nitrogen; that sand layer of sand helps decomposition, which in turn increases nitrogen. One interesting thing, looking at tissue samples at Sim Place: the nitrogen levels are higher there, so we’re not making any applications during the roughneck stage. What’s neat about is that we know that the soil is different than at the home farm–it’s much sandier at the home farm–but it’s pretty cool to see that actually reflected in the numbers.”

He’s also working a plan to “culturally” attack the fruit rot issue. “This year we’re gong back to pruning some beds. The hope is that opening up the canopy will lead to a drier canopy and less fruit rot,” Mike says. “We haven’t done it in a few years, though other growers have, so we’re going back to it to see what we can find out.” Other things Mike’s team is working on: Tim Bourgeois is working on getting bees, as well as making sure we’re compliant on safety regulations; Matt Stiles is already working on young beds, replacing some plants that popped out during winter flood; Vanessa DeJesus is going through ICM supplies and making sure we have everything we needed before we kick into high gear. 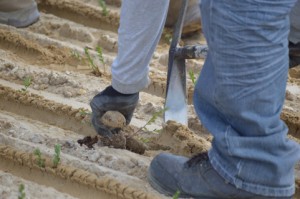 And, of course, our team is doing the usual ongoing equipment maintenance as well as designing some improvements. “We experimented last year with the dry fertilizer applications on the new buggy,” says COO Bryan vonHahmann. “We learned a lot from that; we discovered it was under-powered, as well as having a few other small issues, so we’re remedying that. We’re also going to be experimenting with using it for liquid applications; it may not be the final unit that we use, but it’s going to teach us a lot. Mike’s working on the criteria for this; we’ll pick one or two systems that will use it exclusively for the entire season and see how we do.” We’re also moving ahead with the next stage of pump automation as well as thinking ahead to harvest. “There are quite a few things we need to do there,” Bryan says. “We’re going to build two more blower tractors, and we’re getting a third bog side cleaner. We’re also going to have some folks come in and talk to us about how to tweak our machinery at the loading platform to try and eliminate rot before sending fruit up to Chatsworth.” 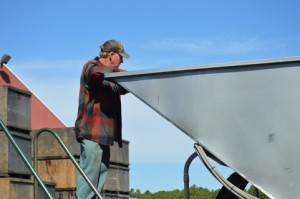 That’s quite a list, but our team, as always, is prepared to work hard and do everything we do better every day!