Last month another one of our valued team members celebrated a work anniversary: Jeremy Fenstermaker has been here at Pine Island for fifteen years! Jeremy is both versatile and affable, which makes him a valuable resource for everyone at Pine Island from CEO Bill Haines all the way down to your humble blogger. 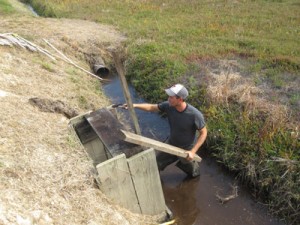 ICM manager Mike Haines has worked closely with Jeremy since coming on board full time. “I mainly work with Jeremy on growing decisions. The great thing about Jeremy really is his versatility; he’s so knowledgeable about just so many different aspects of the farm, and he’s taught me a lot about growing decisions over the past couple years. He’s got so much experience with building bogs, renovation, water management, harvest . . . he knows a lot. And the great thing is, he has no problem with sharing that knowledge; he genuinely wants to help you learn, and is very willing to work together to teach new guys. When I first started, it was all pretty new to me. I’d worked with cranberries some, but making decisions about fertilizer, for example, was tough at first. A lot of the things we need to look for with plant nutrition are very subtle, so having Jeremy explain using knowledge gained from his own past experience has been hugely informative. He knows exactly what decisions he’s made in the past and the effect those decisions have had: he’s dealt with it, paid attention, learned it really well, and it’s just a big confidence booster to have him says ‘yeah, that sounds about right’ or ‘based on my experience this is what I would do.’ He’s easy to work with, and he’s also just fun, which is great when you’re working long days or in bad weather. It makes days go by quickly and pleasantly.” 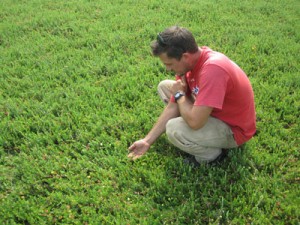 While COO Bryan vonHahmann has only been here for four years, he’s impressed with Jeremy’s work. “I think he’s grown with Pine Island both personally and professionally over the time I’ve worked with him,” Bryan says. “He’s a bright guy, very intelligent, and finding the perfect position for his skills and abilities has been good for both Pine Island and him.” There are drawbacks for this, of course: “He’s often wanted for consulting on various things regarding growth and irrigation, among other things, but he already has a lot to do,” Bryan says. “So what we need to do is build that support for him by training other people and let him focus on certain areas. He’s got a tremendous skill set: harvest, designing bogs and irrigation systems, just growing the crop. His main focus now is bog design and irrigation consulting, and it’s been a win-win for both him and for the company.” 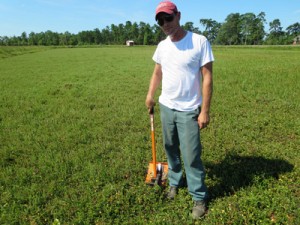 “Jeremy’s valuable in a lot of ways,” says Bill Haines. “His knowledge of growing cranberries has been a huge asset to Mike, and particularly valuable, as far as I’m concerned, in his contribution to the growth program. He’s been very creative about redesigning the bogs to make them more efficient for harvest, for use of water, and in general. And his redesign of a lot of our old irrigation systems is making us much more efficient, because we’re using less water but we’re getting better coverage and as a result, better crops. He’s thoughtful, he’s analytical, he’s patient, and an extremely valuable member of the team. And he’s a pretty funny guy, too!” 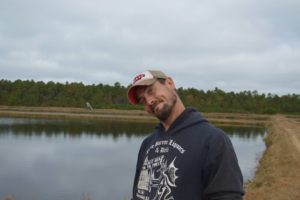 His main drawback appears to be that he’s a Steelers fan, but nobody’s perfect. Thanks for all of your hard work over the past fifteen years, Jeremy; we appreciate you more than you know!