Our busiest season has finally begun! Our harvest crews started picking at the southern end of the home farm and out at Sim Place this week.

“We started out at High Bridge because those are now the oldest beds planted with early-season varieties,” says CEO Bill Haines. “These bogs in particular are planted with Crimson Queen, which are our earliest variety. We like to plant those furthest from the center of the farm. As we finish picking beds we’re working our way closer and closer to home. It means we don’t have to travel as much for frost, among other things.” Conditions have been pretty favorable as well, he says. “The water level is good. And it hasn’t been too hot, either. We even had frost last night, which will help us with color.” 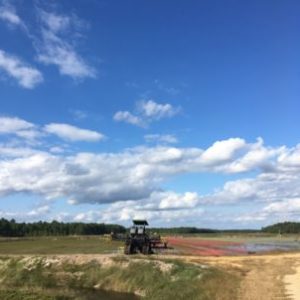 As of right now, we’re only running two crews, but expect that to change shortly. “We’re also picking the young bed at Osborne Spung for first time, which have been planted in Mullica Queen,” Bill says. “This will be our first significant harvest for that particular variety.”

Our team has had to make some adjustments to their approach, as they do every year. “Some of the regulations have changed with Ocean Spray on rot percentage and color,” says manager Matt Giberson. “Which means we need to keep an eye on things. When you’re driving by a bed it looks red enough on top but under the canopy it’s white, so we have to manage that. And rot tends to be high in the young beds before a canopy is fully established, so we’re testing samples before it goes to Ocean Spray. If the numbers aren’t great, we’re taking it to our own packing house and clearing it out before we send it up the road.” Matt also notes the optimal conditions this week. “We have plenty of water, but it has been a little dry. We’re starting wells now in order to be prepared in case it remains dry; we haven’t needed to in a long time so it’s good to have them ready anyhow.”

In general, the color is looking really good this year, he says. “Better than it was at this time last year. The TAcy seems really good for the Crimsons. We’re starting our third crew this weekend. The lake’s done, we’ll have Panama done Tuesday, then we’ll finish getting the early stuff from Sim Place. We’ll get the Ben Lears out, go down through Worth Tract, and pick all the young beds.” 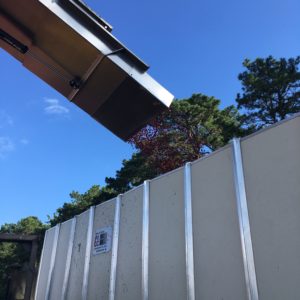 If Matt had just one wish for the upcoming season? “We could use just a half inch of rain. Just a little bit! But I think it’s going to be steady as she goes. We got frost a little early this year, but that should help with the color. When we don’t have to chase the color, it all goes a little bit easier.”