William Stokes Haines, Sr., Ralph Haines’s younger son, was the third generation to run Pine Island Cranberry, and is the one who really made it what it is today. 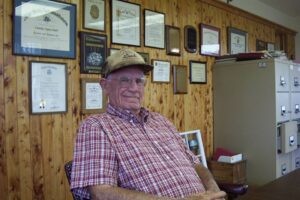 Raised in Vincentown with his older brother Martin, Bill always had an interest in the family business as well as agriculture in general. “I love all kinds of farming. I was reared in the cranberry business, but I had a good friend who was a general farmer still using the old methods,” he recalled to a reporter in 1985. “He had pigs and cows and still farmed with horses. He was seventy; I was ten. I learned to milk, to handle horses and do all types of farm work. I was fascinated.” 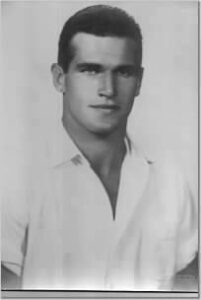 After graduating from Pemberton High School in 1939, he briefly attended Rutgers before returning to farming full-time and the rest, as they say, is history. Under his guidance and leadership, Haines and Haines grew from 400 acres to what it is today as Pine Island. “The cranberry industry has changed dramatically in my time,” he said in an interview. “Harvesting has gone from hand picking to scooping to mechanical dry harvesting to water picking. Mechanical pruners, ditching machinery, sprinkler systems, and new varieties have all modernized our business.”

What he so modestly left out was how much of that modernization was due to his work. In a tribute to him after his passing, Mark Ehlenfeldt offered a succinct summary:

Bill had experimented with various aspects of wet harvesting going back to the late 1940s, but the pivotal event occurred in 1960, when he borrowed a water-reel harvester being tested in Massachusetts, and brought it to his farm. He soon duplicated the machine and began hauling in record-breaking numbers of barrels. . .per acre of bog. By 1962, it was the only method of harvesting he used on his farm. Edward V. Lipman in his book “Labor of Love: My Life’s Work With Cranberries and Ocean Spray” recounted that after Bill made his first wet harvest on 25 acres of his own property, the Cutts brothers were so impressed they interrupted their harvest to build their own wet-harvest equipment. Soon almost all other New Jersey cranberry growers had followed suit.” 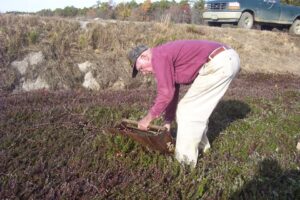 Bill was a strong proponent of research as well as innovation and and helped establish and support the Philip E. Marucci Center for Blueberry & Cranberry Research at Oswego. Many years later, Dr. Nick Vorsa named a new variety in his memory.

Part of the reason behind the decision to name the new variety for Bill Sr, Nick says, is that Bill generously offered beds for the early Rutgers cranberry breeding program: “He greatly enjoyed walking the Rutgers breeding plots on the bed and observing the performance of over 1,600 plots.” As the release says, “[e]mbracing new technology was a priority for Bill”; he never took anything for granted and was always looking for ways to improve the crop not just for his own farm, but for his fellow growers as well. 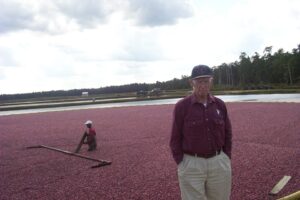 His greatest legacy, however, comes from the stories he left behind. Ask any local farmer who knew him to tell you a story about Bill, and you’ll be amazed at what they have to say. The breadth of his agricultural knowledge and his community involvement as well as the depth of his generosity and kindness (not to mention his total aversion to anyone referencing any of it) are still spoken of today. 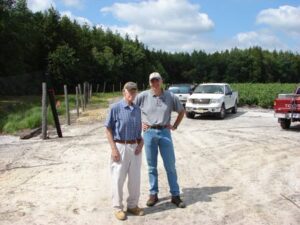 Bill Sr. farmed the way he did because he saw the benefit not for himself, nor for the next generation, but for the generations to follow. And that’s still how Pine Island Cranberry operates today: doing whatever it takes to grow cranberries better every day.