Local florist A Rose In December is a vendor that Pine Island Cranberry is proud to support! The Medford shop is a long-time business and personal favorite of both the farm and the family; they do beautiful work.

Owner December Giberson-Shover is also actively involved in the community, particularly with local schools. “Giberson-Shover has a long history of volunteerism in the community,” says the NJEA. “For 11 years, she has worked with the Lenape School District transitional program. She accepts district students with special needs and, through her business, mentors them in life and work skills.”

There is one cause that’s particularly close to her heart: Operation Yellow Ribbon.

Operation Yellow Ribbon is a south Jersey-based nonprofit “consisting of all volunteers who shows support for our United States Military Forces serving in the Middle East including Iraq, Afghanistan and those supporting Operation Enduring Freedom and Operation Inherent Resolve through”:

1) Organizing and collecting donated U.S. Troop supplies and goodies to send to our brave Heroes deployed in harm’s way in the Middle East including Iraq, Afghanistan and those supporting Operation Enduring Freedom and Operation Inherent Resolve

2) Helping to promote, coordinate, and facilitate welcoming home events for local veterans in the South Jersey area by partnering with the Warriors Watch Riders and other Patriotic organizations to bring our local Heroes home in “Rock Star Fashion”

Giberson-Shover, whose son is in army, is passionate about the importance of pulling the community together. Earlier this year, a committee of made up of local businesses (this year’s theme: Unity In The Community), working with Operation Yellow Ribbon, managed to fill two school buses with donations. A fundraiser last month at the Flying W in Lumberton sold 200 tickets and raised $12,600, which covered the shipping costs of 360 packages for U.S. troops. “We don’t want the troops to think we don’t appreciate them,” she says. “They give up so much to let us have our freedom.”

It’s a perspective that Bill Haines appreciates. His daughter Becca and son-in-law Jeremy met while both were serving in the Army, and Pine Island’s equipment team also counts a Army vet in their number with Larry Wedemeyer. “We are grateful we can help an organization like Operation Yellow Ribbon that supports those few who sacrifice so much to protect us all,” Bill says.

If you are also interested in supporting this organization, you can do so tonight! Come to the volleyball match at 5:30 P.M. at Seneca High School and bring a care package item to support Operation Yellow Ribbon and be ready to cheer on your favorite volleyball or football players! 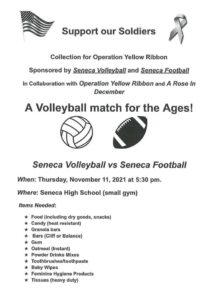 With a planned 2022 theme of “Honor The Brave”, that’s entirely likely!