Continuing with our more in-depth look at Pine Island’s water management program, this week we took a look at our water micro-management program in our young bogs. Now that the lampinenometers and new underdrain have been installed, it’s time to start monitoring them. 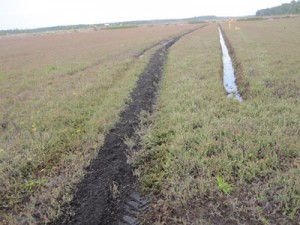 Mechanical ditch cleaning has been completed for all the young bogs; Kelvin Colon’s team cleaned out pipes and unplugged underdrain endpipes where necessary. Every morning, he or supervisor Kylie Naylor head out to read the tensiometers and lampinenometers, as well as check the soil. (To recap: lampinenometers measure the water table beneath the cranberry bed to make sure there is a sufficient depth to provide water to the root zone by capillary rise while at the same avoiding oversaturation.) 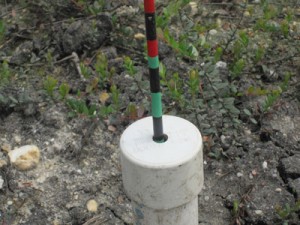 Kylie’s major task has been creating the micro-maps for water management. “The young bogs are our high maintenance bogs, so they require a lot of care,” Kylie says. Fishhead #1, which took on a lot of water in the Labor Day storm and needed some replanting, has three different stages of plants: the established area, newer rooted cuttings, and broadcast cuttings. 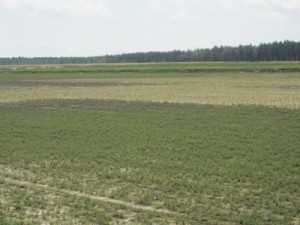 In order to best map the areas that needed more attention, Kylie took the irrigation sprinkler maps and traced them. Then she went out and walked the entire bog and outlined each area: established plants, rooted cuttings, and broadcast cuttings. “Sprinklers will have to be on for less time on the broadcast than the rooted cuttings, and for less time on rooted cuttings than the established plants,” Kylie says. The next step will be tying a colored ribbon on the sprinklers in each area according to code on map. “That will give us an idea of what to watch; this way, we can shut off sprinklers by hand as necessary,” she adds. When Fishhead is done, she’ll be repeating the process at Papoose. 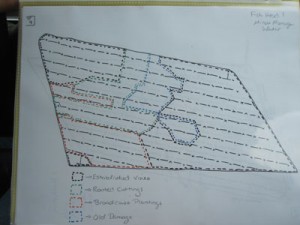 Last fall the team also sanded one corner of Fishhead by hand, in addition to sanding the area where the rooted cuttings were located, as there were spots that settled lower than other parts of the bog when the dam broke in the big storm. The team also put in some gravel to fill in washouts, which should hold better against erosion rather than sand alone. 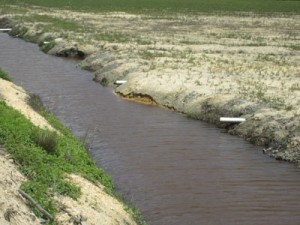 Team member Vanessa DeJesus also put two tensiometers in Fishhead: one in the established area, and a new one in the broadcast area, in order to keep a closer eye on the moisture levels. “Younger bogs need a bit more attention,” Kylie says. “This tensiometer [in the established area] is reading at a six, so that’s good. And the water table reading is in the green area, so that’s okay, too.” She then demonstrates checking the soil by digging some up with her bare hands: “If it clumps and stays together, it’s getting moisture, but if it just crumbles then it’s a bit dry. You can’t just assume that the tech is working; you need to get a feel for the bog conditions as well.” The tensiometer in the broadcast area is reading as wet, which is good, because the area with the broadcast cuttings are pressed in an area that is sandier than the established vines. 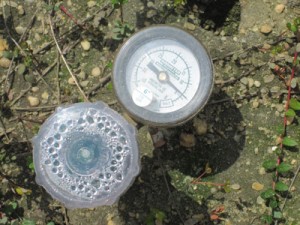 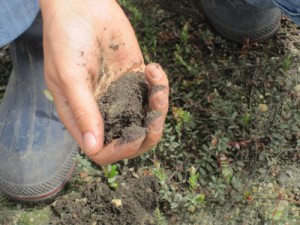 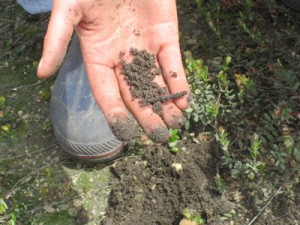 The New Production team is also monitoring weather conditions. Since we’re expecting rain, Kelvin is monitoring the ditches so he can keep an eye on the water levels and then raise the ditches if necessary. It sounds counterintuitive to raise water levels during a rain event, but the team is trying to keep ditches higher in new plantings in order to prevent erosion; they will then drop the ditches after rain and level off in order to maintain the water table. 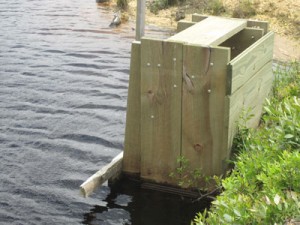 Water management at Fishhead was also tricky during frost. Harrison (an established bog) and Fishhead share the same pumphouse, but Fishhead wasn’t being treated for frost. So Kylie and Kelvin had to make sure the valves at Fishhead were turned off. If they weren’t, the plants could get watered when they didn’t need it, and it would also make extra work for Jeremy [Fenstermaker], who runs the Sim Place pumps during frost. “It made it extra important to work as a team and communicate with Jeremy,” Kylie says. “We did very well!” 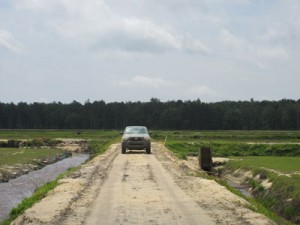 It’s this commitment to teamwork, attention to detail, and care for the bogs and their surrounding environment that helps Pine Island grow more acres and more fruit per acre, year after year.